Last week we fought the bolts in our valve cover on our Grizzly 600. Every one of them was stuck tight and rounded off. After fighting bolts for a few hours, we left with you with this... 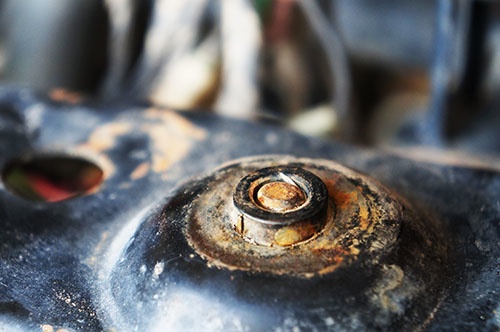 We noticed that one of the bolts on the frame had the head broken completely off. The bolt was still in the thread, but it was flush with the frame. There was no way we were going to be able to remove it by conventional methods. Feeling frustrated with our valve cover debacle, and now needing to order $20 worth of new bolts, we sprayed the broken bolt down with some BG In-FORCE and walked away. 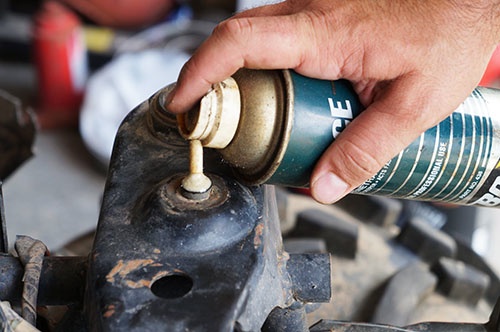 I have been using this stuff for a long time and in my opinion, if anything is going to break the rust loose, this is it. 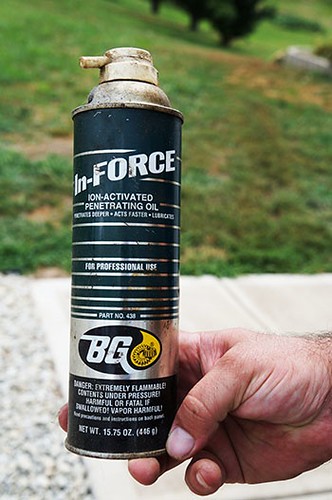 A day and some ice cream later, I was ready to tackle this headless bolt. I knew that I had a few options but all of them required drilling and some tools… The first thing I dug out was my Blue-Point extractor set. You can find a nearly identical set on Amazon here. 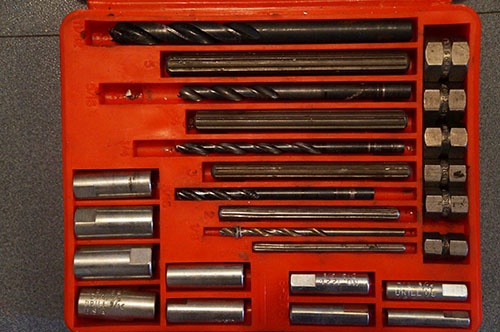 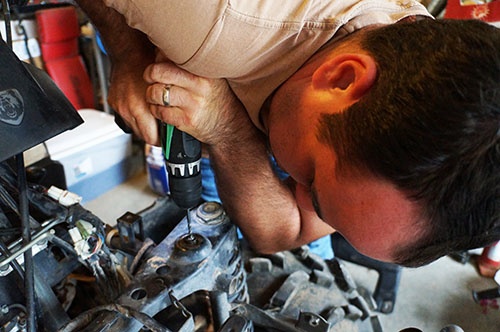 Unfortunately, my bits were not sharp. After a few minutes of not getting anywhere, I grabbed my Bad Dog Tools Multi-Purpose Drill Bits. I love these bits. We picked them up at a farm show a few years back and they have been our go to bit ever since. Even the wife loves them and is meticulous at making sure they all get put back together as a set every time they’re used. They are very strong and have a lifetime guarantee. They’ll even sharpen or replace bits that are dull. 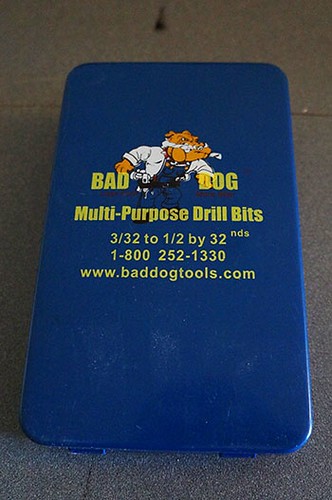 Once I switched to a sharper drill bit, things went much smoother. 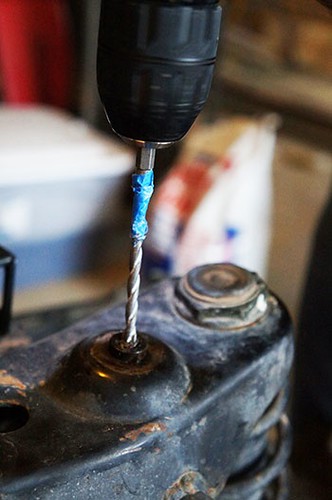 That is until I realized that the bit was sliding off to one side. I tried to compensate for this by drilling at a slight angle, thinking that I would eventually get the bit centered on the bolt. Just FYI, the blue painter's tape on the drill bit is from a previous project. We just haven't removed it yet. Our bad. But once you’ve started drilling off-center, it can be very difficult to correct. The bit naturally wants to slide into the divot it’s already started and fighting it just seems to make things worse. 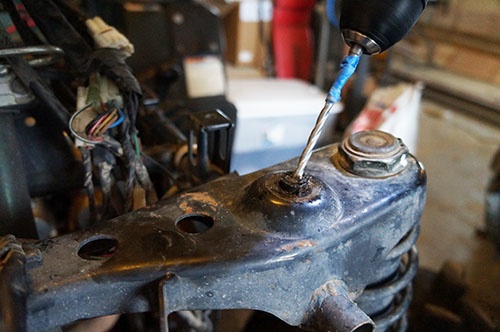 Once I decided that drilling it out wasn’t going to work, I tried using the chisel. Now that I had a hole started off center I started to use the chisel on the side of the bolt that hadn’t been drilled down yet. 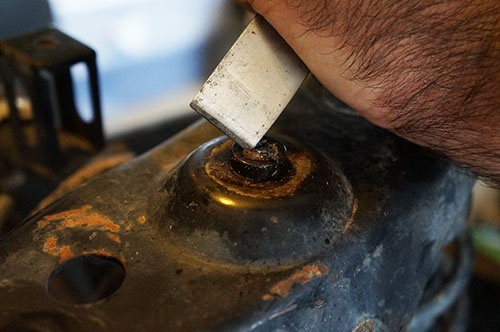 The chisel wasn’t quite the solution I had hoped it would be, but it did work to even out the top of the bolt. 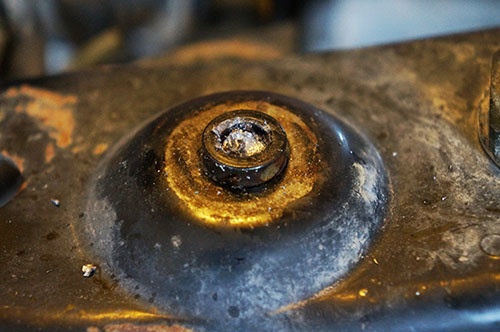 With the top of the bolt evened back out, I decided to give drilling a second chance. This time I made sure to keep the bit as centered as possible. My second try worked great and I was able to drill through the entire length of the bolt. Unfortunately, I drilled the hole larger than the 3/16th extractor bit included in my Blue-Point set rendering it useless. Ugh. So, I decided to move onto the Easy-Outs tapered bit extractors. You can find the set I used on Amazon here. 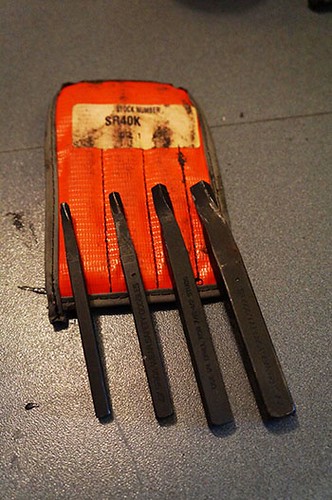 Using the Easy-Outs is… easy. Just drive the extractor into your newly drilled hole and turn. I started with the smallest one. 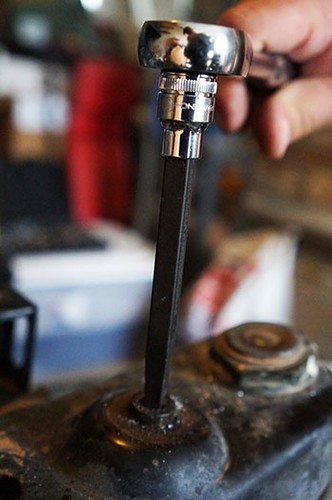 When the bolt did not move at all, I drove in the next sized extractor and while it felt tighter, I got the same result; the extractor just spun and did not grab the bolt. After looking closer at the hole, it looked like someone cross-threaded the bolt and broke it off. There is no telling how long ago this was done and what they were using to install the bolt; my guess is an impact driver with way too much torque. At this point I figured that I already have a hole, why not go ahead and drill it all the way out and rethread it. (Fortunately, that’s an option this time. To read about our last fiasco repairing a thread, click here). To rethread the hole, I used a standard metric tap and die set. If you don’t have access to an entire set, I would recommend you just buy just the size you need. In your set or on the package it should tell you what size to drill bit your need for the hole. My bolt size is an M8x 1.25 pitch; according to the drill guide in my set, it takes a 7mm drill bit. 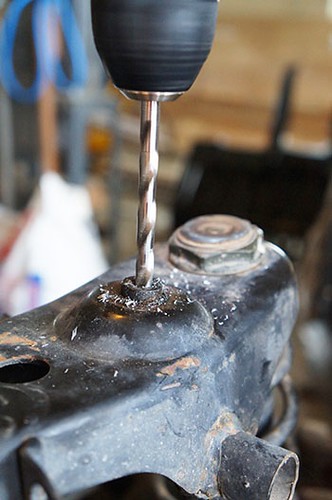 When you’re ready to use the tap, things get a little tricky. It is really important that when you start the tap is straight and that it stays straight the entire time you are working. 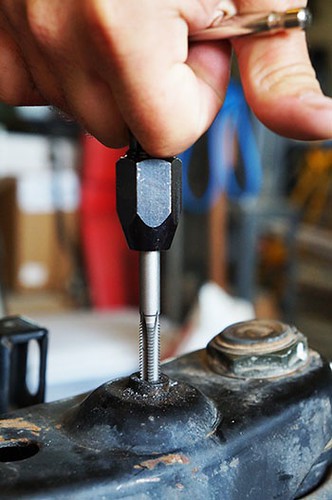 I started by slowly turning the tap clockwise. You should start it off at one full turn. After the first full turn, back off by about half a turn in the other direction. This will help to remove the shavings from inside the newly cut threads. You really want to make sure that you remove as much as the shavings as possible. Otherwise, the shavings will cause the tap to angle to one side and you’ll have a crooked bolt. Once you’ve removed the initial shavings, you should be safe to go about every three turns before backing out. I just kept working the tap in and out until it was completely through the hole and I could see shiny new threads. 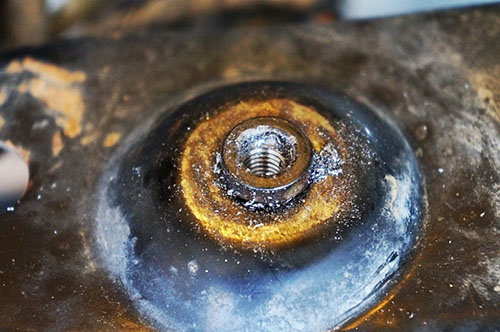 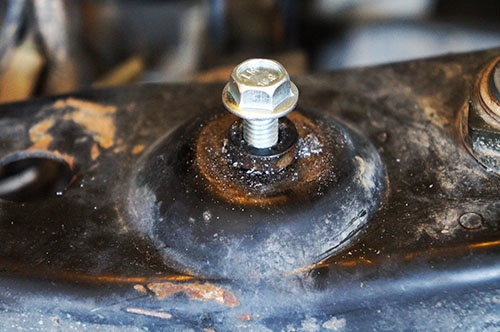 And just in case you’re wondering, if the broken bolt would have come out I would have used my rethreading set like this one from Amazon. The rethreading kits are great tools for cleaning the threads once you have removed a bolt. If the bolt was especially hard to remove, it may be that rust or other gunk was clogging up the thread and gripping the bolt. The rethreading tools will clean out all of that gunk and make the bolt easier to remove next time. Since this Grizzly has given me so much trouble with bolts so far and since the bolt I just drilled out has an identical bolt on the other side of the frame, I went ahead used the rethreading kit in hopes of saving myself some time and frustration down the line. If you do have a rethreading kit, just keep in mind that they are not taps and will not start new threads -- they are for cleaning only. They are very simple to use just spin the cleaner in like a normal bolt… 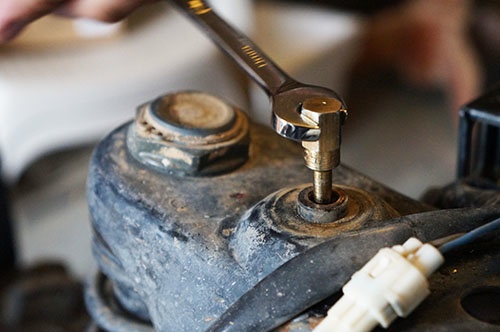 Turn them in until it comes out the other side or bottom… When you remove the cleaner, you are all done. This is the best way to get as close to new threads as possible. Cleaning the threads doesn’t take long and if you are already having issues with removing bolts, I highly recommend taking the extra few minutes to save yourself some time down the line. I am thrilled to have this little project finished up. I don’t know what it is with this Grizzly, but I keep encountering small problems like this one. Here’s hoping we’re not replacing any more bolts anytime soon…
Do you have any horror stories about broken off bolts? How about any better ways to remove them? Any tools or penetrating oil that you swear by? Let us know!
Filed in: Maintenance and Repairs, Yamaha Grizzly 600
Share:
Share on Facebook Tweet on Twitter Share on LinkedIn
Previous article A Look at The BEST ATV Service Manual
Shop Best Sellers
See more