Anatomy of an ATV: Starter Recoil

The starter recoil assembly is present on any engine with a pull start mechanism. This includes some ATVs, go-karts, lawn mowers, weed eaters, and many others. It is located at on the lower half of the engine. Whether the starter recoil is on the left or right hand side varies widely.

The starter recoil is a round assembly with a pull mechanism located on the top. Note that the photos below are of the starter recoil on a generator and a tiller. Starter recoils are present on a wide variety of engines but generally all look the same. 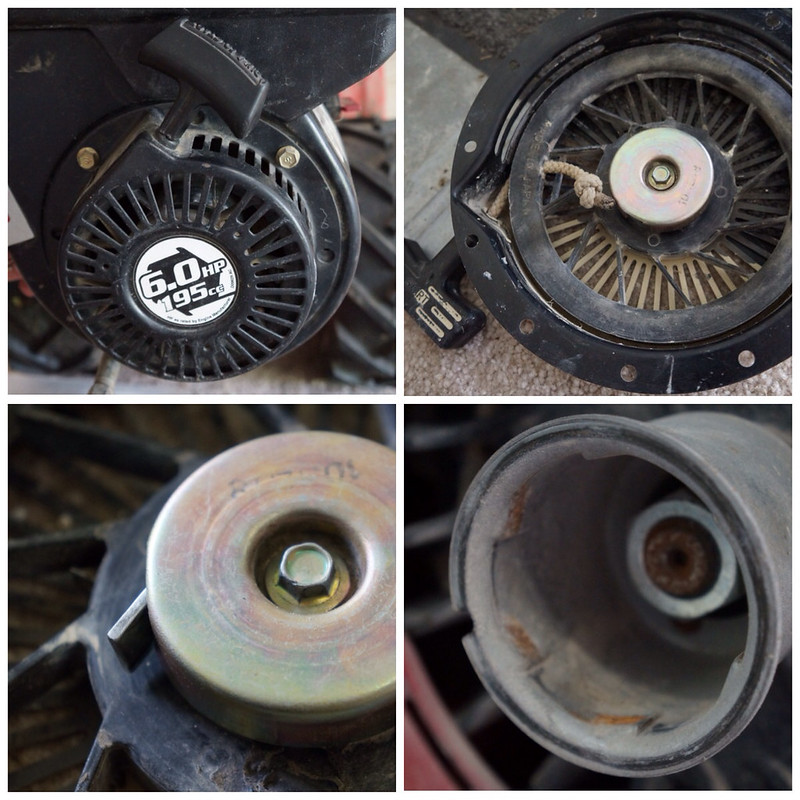 The starter recoil is commonly known as a pull start becuase it allows the user to turn the engine over manually. When the handle on the starter recoil is pulled, the attached cable or rope, with the assistance of internal springs, causes the recoil assembly to rotate. When this happens, tabs on the inside of the recoil (commonly referred to as dogs) catch the notches on the inside of an internal cup. This cup is connected directly to the crankshaft. The notches catching on the inside of the cup cause the cup to rotate, thereby rotating the crankshaft and turning the engine over.

Starter recoils are not a common wear item. That is, they do wear out but usually over a period of several years. This varies widely as there are a number of contributing factors. ATVs with an electric start as well a pull start may find that the starter recoil lasts longer due to infrequency of use. Additionally, the materials used in manufacturing vary widely. If cotton rope is used as the pull mechanism, it may stretch and wear out more quickly than cable. Fortunately, the recoil can usually be rewound to increase the lifespan of the assembly. As well as the pull mechanism, the dogs on the inside of the assembly may wear or break depending on the quality of material. Fortunately, the internal cup is not a common wear item and will most likely never need to be replaced in the owner's lifetime. The cost of replacing the external starter recoil assembly varies tremendously upon the engine type and manufacturer.
Filed in: Anatomy of an ATV
Share:
Share on Facebook Tweet on Twitter Share on LinkedIn
Previous article Unboxing the KFI 4500-lb Stealth Winch
Next article How to Make Your Own Inexpensive Gaskets
Shop Best Sellers
See more