The first time we heard of the Micro-Start Personal Power System, we knew within seconds that it was something we had to own. Once we had it, we knee we had to include it on our ATV Christmas list. But what is it? The Micro-Start is a pocket sized jump-starter made by Antigravity Batteries. But it’s not just a jump-starter. The Micro-Start is also a personal power supply that is capable of charging phones, laptops, cameras, and basically anything that falls into the category of mobile electronics. It comes in two flavors: the XP-1 and XP-3.

Last  fall, we made the jump and purchased one of our own. The ability to charge laptops is what sold us on the XP-1. The price difference between the two was pretty negligible ($159.99 for the XP-1 and $129.99 for the XP-3, respectively) so springing for the XP-1 was a no brainer for us. The number one reason that we invested in this device, is the fact that it is small and lightweight enough to travel with us. We purchase a lot of used ATVs and we’ve found ourselves in many situations where the ATV either had a battery that was completely dead, or was missing a battery all together. We liked the idea that we could pull out our Micro-Start and have some way to inspect the ATV in front of us. In Four Tips for Buying a Used ATV, we mentioned that we normally haul a battery around with us. While there wasn't really anything wrong with that method, it made the Micro-Start even more appealing. 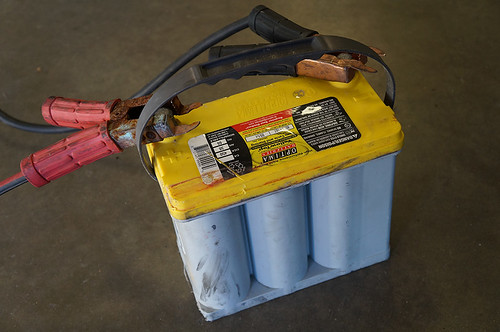 When the Micro-Start arrived in the mail. We were not disappointed. Everything that we used to drag around with us (and so many more cool accessories) fits into the included leather case. The case wasn't anything special, but it's definitely nice to have a place to corral all the accessories. It reminds us a lot of the old CD cases we had in our cars back in high school. Amazingly, on my first draft of this post, I neglected to mention the jumper cables. There are so many awesome features that I completely spaced the most obvious (and important) feature. The Micro-Start comes with a set of small detachable jumper cables which plug into a covered port at the end of the jump started. The small cables are much appreciated as not only do they make the whole system that much more portable, but they replace a really heavy set of cables. At the same end as the jumper cable port is a super bright LED flashlight. The light can be turned on by pushing and holding down the power button on the side of the Micro-Start. It has three settings: the first is just a standard flashlight. The second and third are flashing lights. The second setting flashes much faster and is a little closer to a strobe light but the third setting is actually an SOS signal. 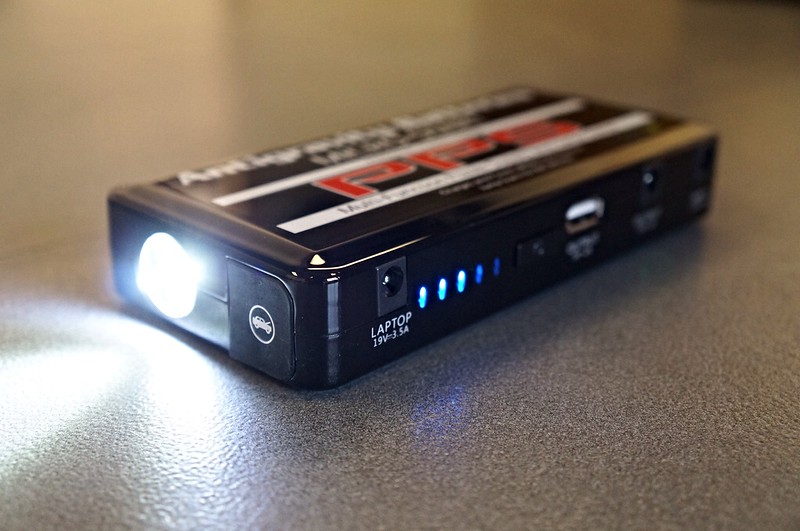 We are on the road a lot and with our blog, our business, and other work related activities, that means that are electronics are on the road a lot as well. In the last few years, I have often considered buying a battery back up for my cell phone but I’ve honestly just never gotten around to it. After we got the Micro-Start, we took a trip to Best Buy and took a look at some of the battery back ups I WOULD have bought, had the Micro-Start not had the USB port - they were in the ball park of $60-$100! Granted, we paid $159.99 for the XP-1 because we wanted to be able to charge our laptops, but even if we had spent a $130 on the XP-3, not only could we charge our phones (for a REALLY long time) but we'd still have the ability to jump start our cars, truck, and ATVs. From a financial standpoint, the Micro-Start is a little more expensive. But for us it was a no brainer.

We always have so much stuff with us and being able to use the Micro-Start for jump starts and as a battery back up for our phones is really nice. We tried it on both Scott's Android and my iPhone 5 and it worked great. We were even able to use the flash light while our phones charged. That gave us quite a bit of peace of mind and we will definitely be ordering a second Micro-Start for our car. Some of the included adaptors for mobile devices were the old iPhone/iPod 30-pin charger and a micro and mini USB, which you can see plugged into Scott's Android phone in the photo above. Unfortunately, the Micro-Start did not include an adapter for the lightning cable used on newer Apple devices, but I was able to charge my iPhone 5 using my own lightning cable plugged into the USB port.

The Micro-Start also included adapters for a variety of laptop chargers. Scott's HP fits, and we're planning a little experiment in the next few weeks to update everyone on just how well the Micro-Start works with the laptop. Unfortunately, there is not currently an adapter available for the MagSafe connector used by Apple. So while we can use the Micro-Start to power Scott's HP laptop and HP Chromebook, I'm out of luck if I want to charge my Macbook Pro. I'm still looking for a way to make this work, but if the sole reason for buying a Micro-Start is to charge a Macbook, I wouldn't hold your breath. Everyone else should be fine though. Admittedly, this post took me significantly longer than normal to publish. There are so many awesome features that it was hard to not write a book. In the next few weeks, we'll be doing some experimenting and hope to go into more detail about the Micro-Start. We want to get an idea of how long we can run our laptops, how many jump starts we can manage on one charge, and we'd like to showcase some practical and even a few unexpected uses for this awesome tool.
Filed in: Buyer's Guide
Share:
Share on Facebook Tweet on Twitter Share on LinkedIn
Previous article Anatomy of an ATV: Drive Chain and Sprockets
Next article Anatomy of an ATV: CDI Box
Shop Best Sellers
See more