New Ramps for the New Rig

Over the last few weeks, we may have been a little excited about our new 2014 Odes Sandrail. But it didn't take long for us to realize we had a problem. The ramps that we normally use when we load the ATVs were about 18 inches too narrow. They were also only rated at 1500 lbs. Since the Sandrail weighs about 1250 lbs without a driver, there was no way we were going to be able to make our old ramps work. Unfortunately, shopping for ramps is not an exciting task. Every set that we came across were all the same basic design: a bifold, trifold, or straight. Out of all the ramps we saw, only few could meet the weight requirements of the Sandrail and even when folded, they were all huge and cumbersome. Then I remembered reading a mention about a ramp in the Dirt Wheels magazine a few months back. So we got it out and looked through it. Again, we saw much of the same, except for one set... 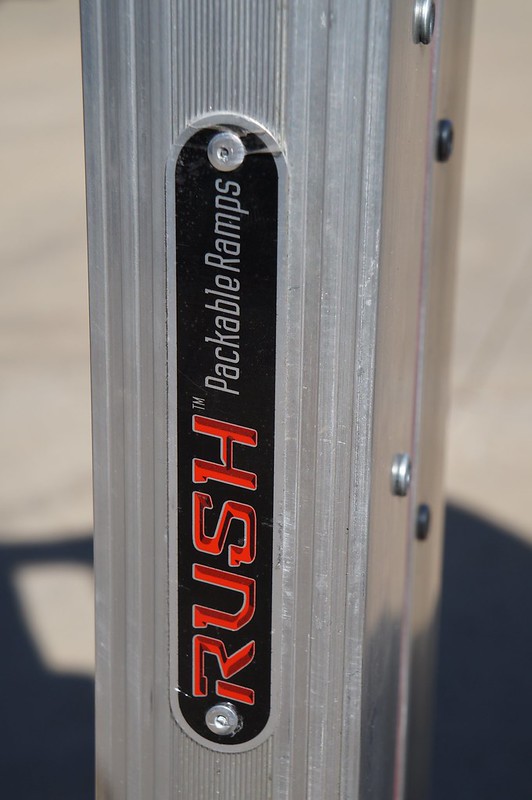 When it comes to new products, I am a skeptic. I have to see to believe in a product and when it came to the Rush ramps, I really wanted to try them out. Unfortunately, there was only about a paragraph of information in the magazine, but it mentioned a 2000 lb weight capacity and a double folding feature. Getting ahold of these ramps was a tall task. I checked around and no one within a 60 mile radius had a set. They all said they could order them, but with the store, now so could I! We thought it might be nice to keep some in stock, but what kind of business owner would I be if I sold a set of ramps without having used them myself? This is when my beautiful wife stepped in and found me a set to review. (Thanks Beth!) When the ramps came in, Beth was out sick, and I had the store all to myself. At this point, not only was I excited about the ramps, but we had already had the Sandrail for a week (and with no way to load it on the trailer). Let's just say, I was excited and there are no photos of the box. But honestly, that's the boring part anyway. But I will say that they were packed very well and seemed to have no issues during shipping. Now here comes the fun part. First, there is a right and a wrong way to open the ramps. Of course, if I had read the directions to begin with, I'd know that. But who needs directions? When you unfold the ramps, you'll want to make sure that the middle hinge is pointing up. If the hinge isn't pointing up when you unfold the ramps, they'll just fall open. When you're in the middle of a showroom with freshly painted drywall, it kinda makes you cringe. Fortunately, the ramps didn't hit the wall, but it could have really hurt someone if they had been standing in front of me. Once I actually read the directions, the ramps were super easy to open (without smacking into the floor, the wall, or an innocent bystander). Again, you want to make sure that you stand them up with the hinge facing up like this... 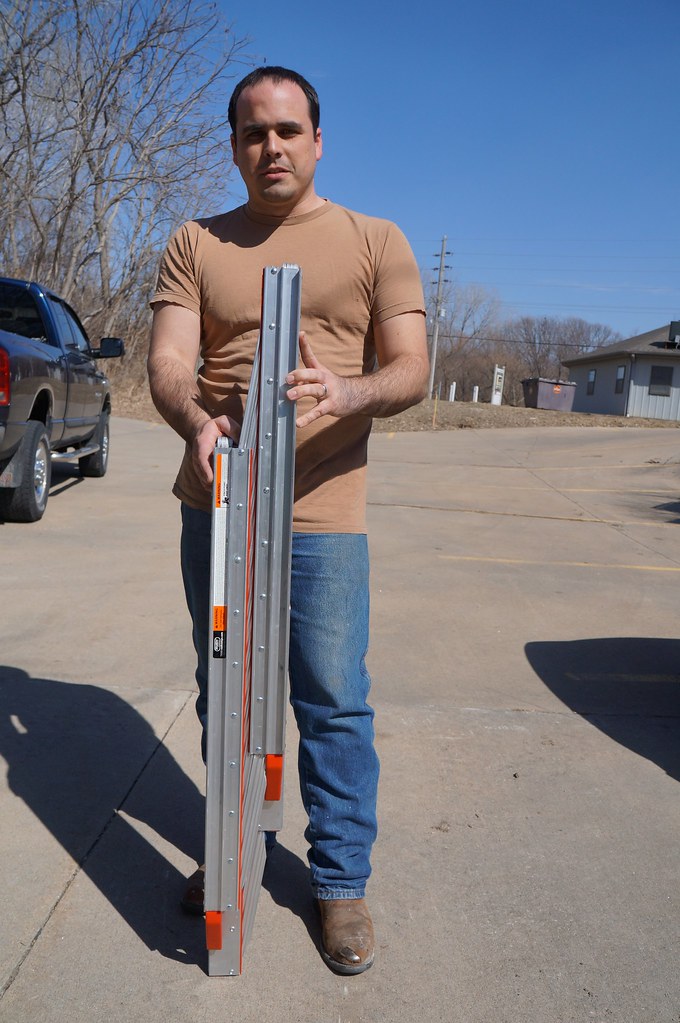 Then grab both outside edges and push down on the taller side. 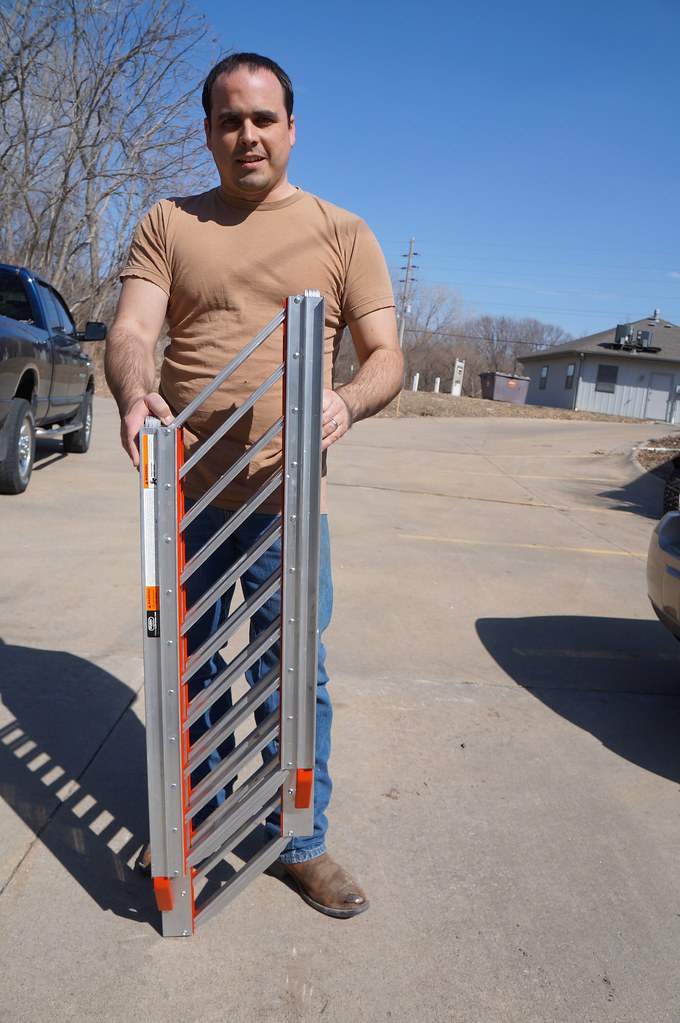 It is that easy. Now you unfold them length wise and put in the safety pin. 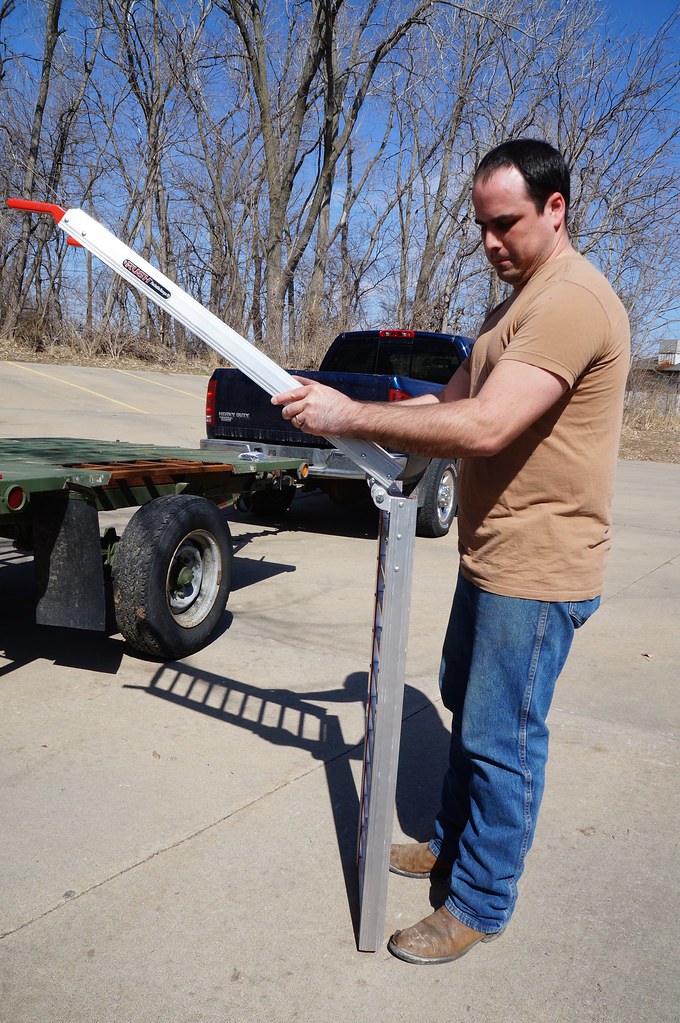 The directions say to place the safety strap on the 5th runner of the ramp. For us, this was too close to the trailer tie down point. We moved the strap around until we found a rung that worked good for us, but I think the 5th runner is a pretty good starting point. 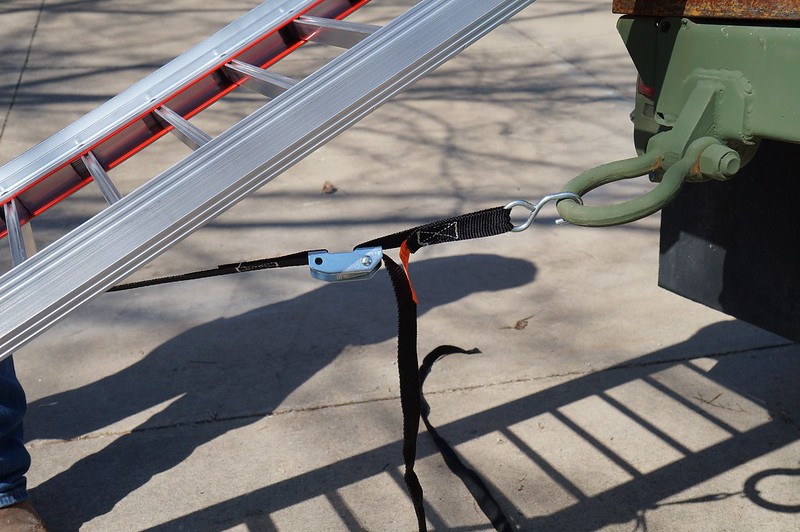 I have always used the safety straps and will never load with out them. I know there are lot of people out there who don't use the safety straps and never have any issues, but one day it will come back to get you. Seriously, just use the safety straps. Ok off the soap box. One thing that is really nice about the Rush Ramps is the generous width. The Sandrail is wider in the rear by about four inches and we're able to move up and down the ramps with our tires completely on the ramp at all times. Since each ramp is about 15 inches wide, it's hard to come up with an application they wouldn't work for. 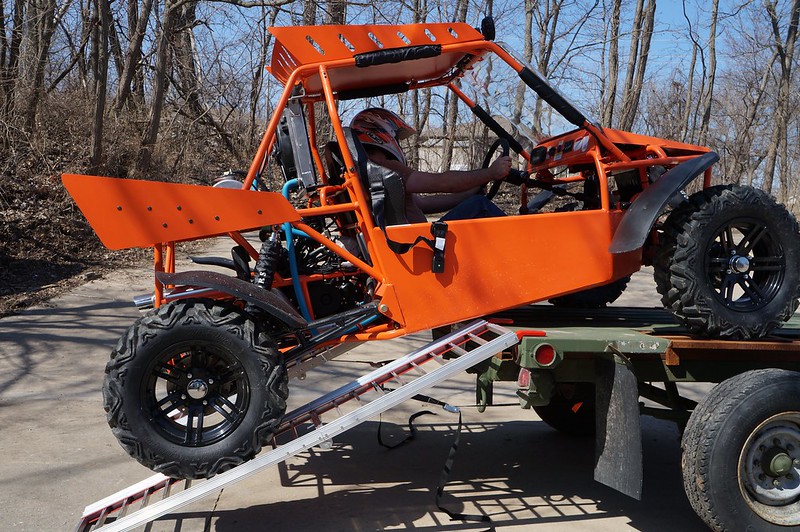 With our old ramps, it always seemed like there was some springiness when we were loading. With the Rush ramps, we never felt the ramps flex. The ramps are still aluminum, so they're light weight (around 20 lbs each), but heavy duty enough that we felt confident loading the 1250 lb Sandrail. Folding the ramps back up is incredibly easy. But we were left wondering what to do with the strap. The directions didn't really say and we really weren't liking the idea of leaving them hanging. If you've ever folded up a military cot, you'll know where we're going with this... We pulled the strap out all the way, wrapped it around the ramps, and then pulled it tight again. Now everything was nice and compact and we knew we weren't going to have to worry about the straps getting tangled with any of the junk in the back seat. 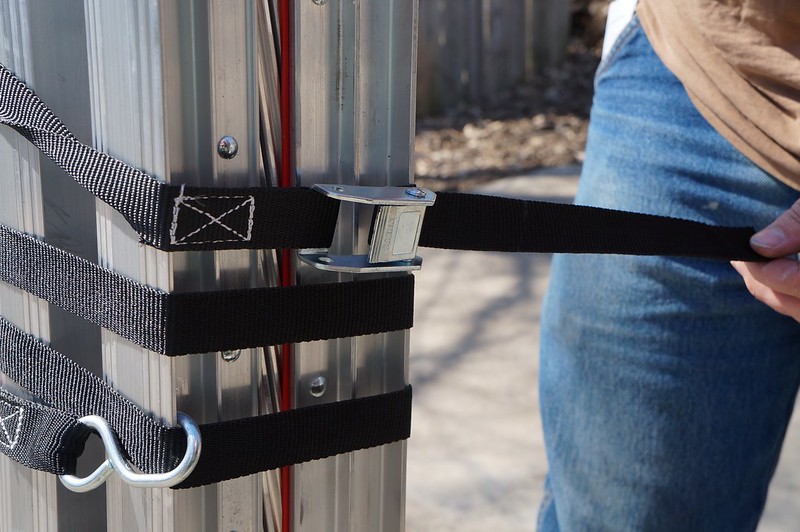 With the ramps folded and wrapped up, we found ourselves standing with the two pins. If we had left them the way they were, I give it two months before we'd lose them. The pins have key rings on them so it was tempting to throw them on a keychain but we really didn't want the extra bulk and there was no easy way to decide WHICH set of keys to keep them on. If we kept them on the Sandrail keys, you know we'd forget them the next time we take the wheelers out. 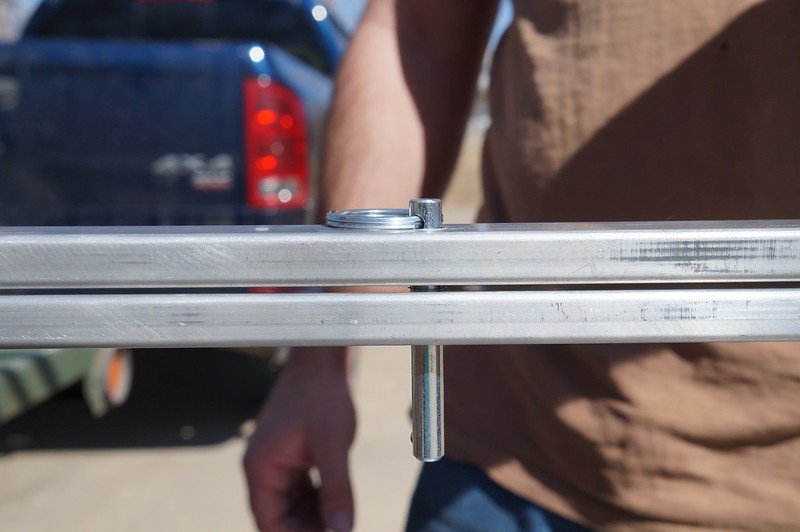 This pin issue is the ONLY real issue we have with these ramps. Fortunately, we found an easy solution. On the adjuster on the safety straps, there are two holes. It looks like the perfect place to store the pins. But the pins don't fit. 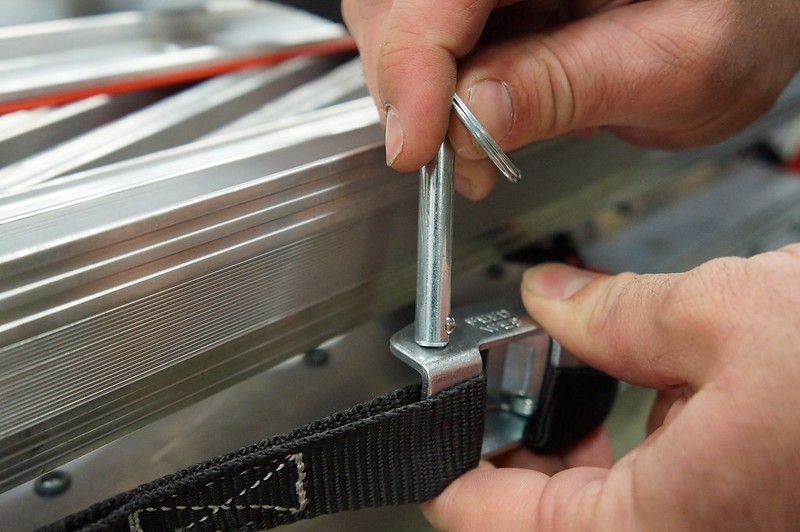 That was a little disappointing. So we drilled the holes out. Now the pins fit. Too easy. 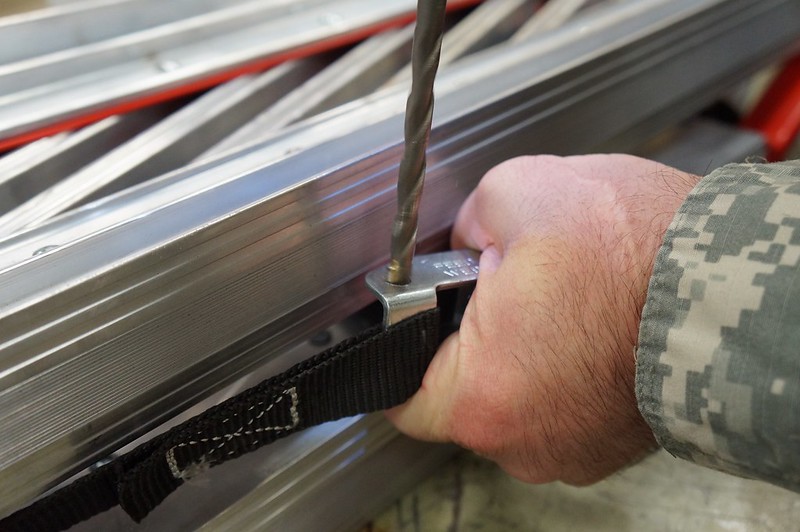 Now we can store the pins WITH the ramps. The hole is just snug enough (and there's a bump on the end of the pin) that they don't come out when we store the ramps. It's a small problem, but losing the pins would have been an inconvenience. There are enough obstacles to getting out and playing (battery issues, heavy traffic, and starter problems all spring to mind) - losing a small pin to a ramp doesn't need to be one of them. 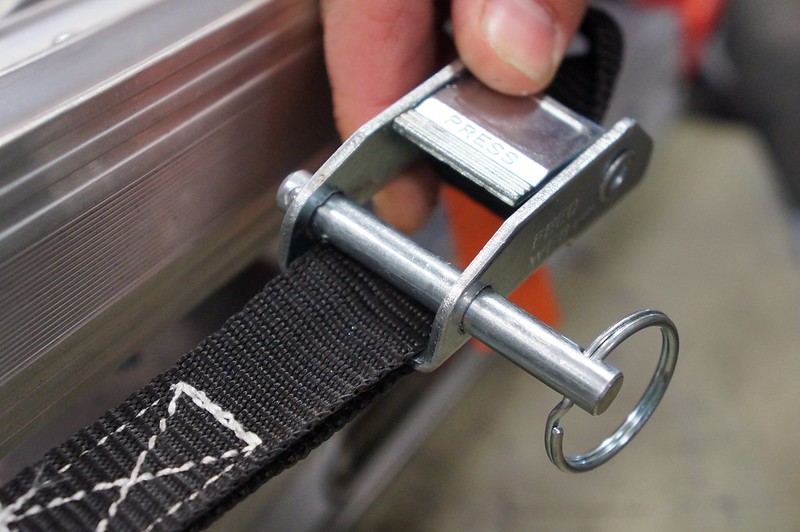 When the ramps are folded up, they fit easily on the floorboard in the back seat of the truck. Which brings us to our next point... A few years ago, I had a set of ramps come up missing. I had been out on the trail on my sport quad all day and when I got back to my truck, the ramps were gone. Fortunately, I was able to get it loaded and get back home. But I can't imagine how we could load the Sandrail without a set of ramps. The added security of being able to fold them up and lock them in the truck makes the Rush ramps well worth the premium. 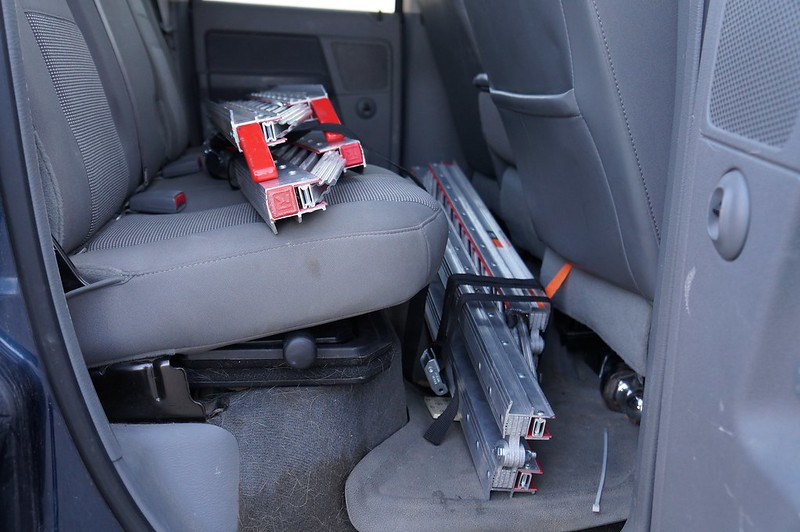 Overall, the Rush ramps are a great heavy duty ramp. Whoever engineered them was clearly thinking outside of the box. We appreciate the 2000 lb weight capacity, the extra wide ramps, and of course, the incredibly compact storage. Even though these ramps are incredibly simple to use,  we would have liked to have seen some information in the directions about storing the safety strap. Additionally, a place to store the pins when not in use is a must. The suggested retail price on the Rush ramps is $349 - it's a premium price for a premium product and we understand that. But at that price point, we don't think most users will appreciate the need to do custom modifications to keep from losing the pins. A few minor complaints later, and the pros still outweigh the cons. We've decided that we will be carrying Rush ramps in our retail space and we're excited to show them off both here and in the store. Once we hammer out some details, we'll get a page up with even more information including pricing and for those of you we don't get to see everyday - the option to purchase online. And if you'd like, we'll install the safety straps and modify the adjusters to hold the pins for free.
Filed in: Buyer's Guide, ODES Industries, ODES Sandrail
Share:
Share on Facebook Tweet on Twitter Share on LinkedIn
Previous article How to Clean Your Air Filter for Better Performance
Next article The ODES UTV Announcement
Shop Best Sellers
See more