How to Quickly Repair an ATV Breather Hose

*We're getting anxious for winter to be over. So instead of staring out the window at the snow, we thought it'd be nice to publish a post we never got around to last fall... We’re no strangers to DIY solutions. We’ve used aluminum welding rods to repair a stripped thread and we’ve even built our own skid plate. So a few weeks ago when we found a totally trashed breather hose (during the weekend when there was no way we were going to be able to get ahold of a new one), we came up with our own solution. We’ve had a youth ATV around for awhile and when a friend showed interest in it, we were excited to see it go to a good home. For a 110cc, this ATV was pretty small. As in, it's original owner had outgrown in by the time he was seven. To give you some perspective, here’s a shot of the ATV next to our boys. They’re big, but they’re not that big. Before we were ready to let this little guy go, we wanted to start it up and double check that everything was still in good working order. Because once you get a four year old boy on this thing, it may be awhile before you can get him back off. When we tried starting it, we ran into some trouble. The engine would start with the choke on but it wouldn’t stay running - it was getting way too much air. So we took a look at the breather hose between the carburetor and the engine and found this: 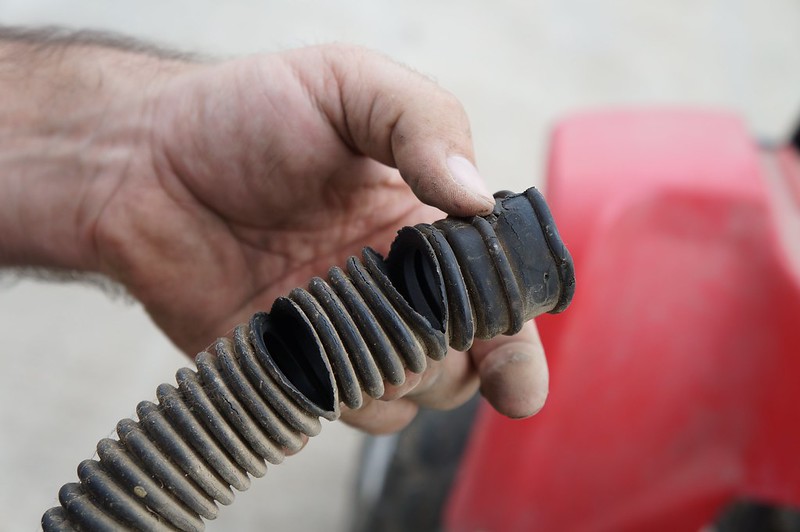 It wasn’t looking good. The breather hose was in horrible condition. It had sat at another friend’s house for at least a year and we were surprised it had ever been running in this condition. Fortunately, it was a quick fix. Unfortunately, it was also Sunday. Not only was there no one in town open, but no one in our town carries parts for Chinese ATVs either. (Except us, now.) Since taking an ATV from a toddler is akin to taking candy from a baby, we set out to find a temporary solution. Because the breather hose is directly attached to the air filter, we would have to order an entire new assembly. Upon closer inspection we noticed a couple of things. The hose was the only piece that was damaged. The air filter and housing were in great shape. So, we decided to take a gamble. Since we were going to have to replace the whole thing anyway, we decided to cut off the damaged hose and see if we could come up with a good temporary replacement. We headed over to Lowe’s and started scouring the plumbing department. We knew that we wanted something that would not only fit, but would be both flexible and sturdy. We were hoping to be able to purchase just a foot of hose, but it turned out that the only piece that met all of our requirements came in eight foot sections. 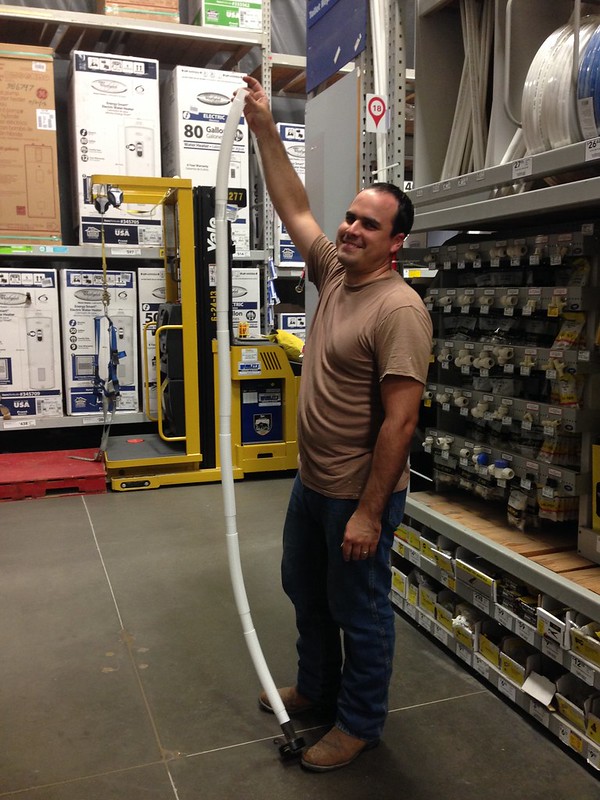 It was around $10 for eight foot of hose. Even though we needed less than a foot, we still figured that it was worth the risk. We picked up a few extra hose clamps and headed back to the house. When we got home, we cut off the length that we needed and slid the hose over the air filter hosing. After it was clamped on, we reinstalled the air filter and reattached the breather hose to the carburetor. So far, so good. 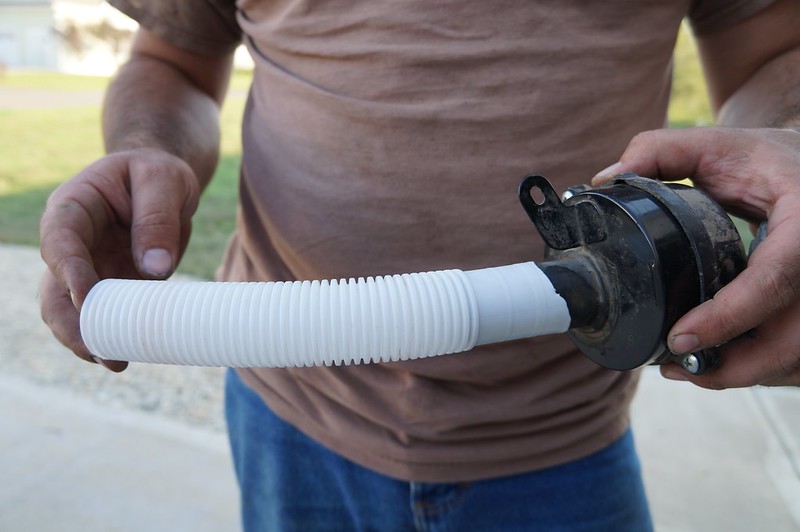 The biggest challenge in this entire project was removing all of the plastic. Once we had everything back together enough that we could start it up. It started right away and worked great. In fact, it worked so well that we don’t have any immediate plans to order a new air filter housing assembly. 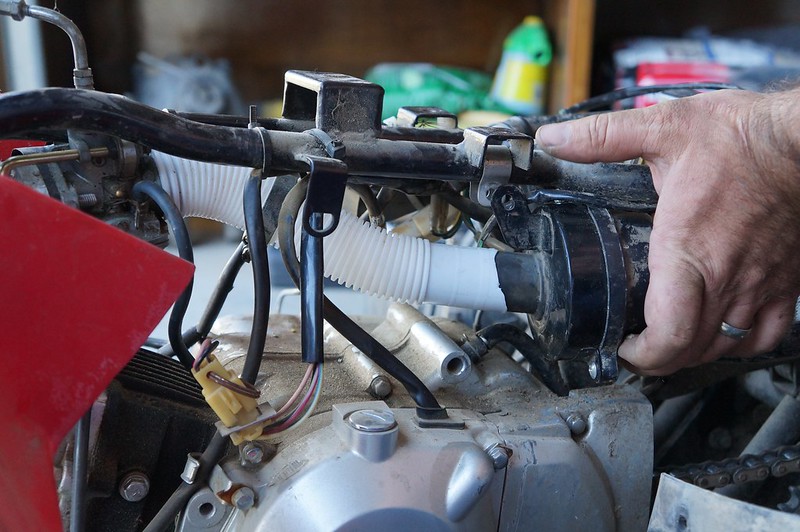 When it comes to DIY, there is so much trial and error. While we’ve been fortunate to have most things turn out well, sometimes we come up with ideas that are just bad. When we went into this project, we really weren’t expecting it to turn out as well as it did. It was one of those “we’ll give it a shot and see how it goes” kinda things. Happily, this worked out. The best part is that I got to watch Scott test drive a tiny ATV. 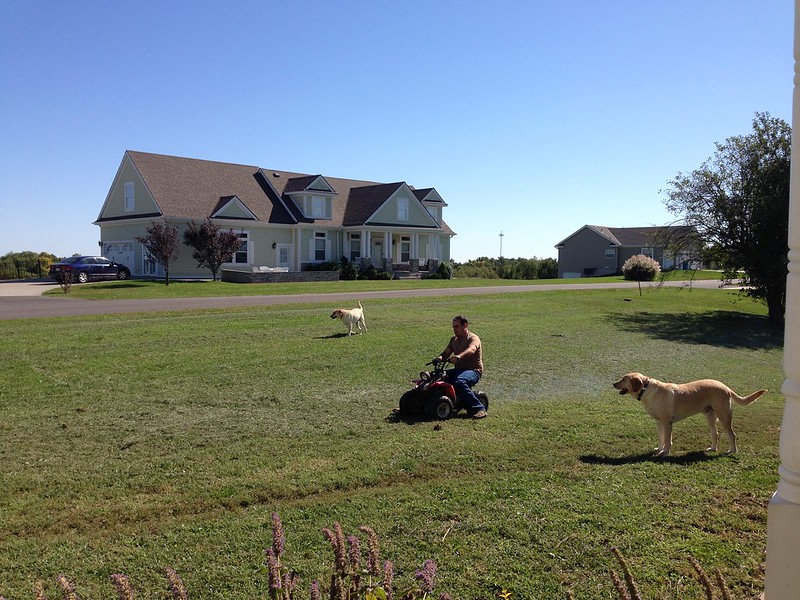